If you made it this far, then you already know what types of abuse there are, and know you need to get out.

I've been there. I've been in the bowels of darkness, covered in blood, wishing I could just die. I was there, riddled with depression, anxiety and pain. I was there in the days before cool touch screen phones with Google at your fingertips was available. I was there after the Internet was created, but not allowed to be on it. I was there when the sight of me at a borrowed home computer gave the impression that a man was going to suddenly jump out of it and start having sex with me right then and there, because obviously I was online to talk to men. Obviously I was trying to figure out how to get away. (I used computers at work, but apparently that didn't bother him since I was bringing home money).


Random Link Away From This Page --- Funny cat videos https://youtu.be/yCUXErWDGss

He was always aware of my desire to escape. The Mental abuse was more challenging. That is exactly what the psychological warfare was all about. Brainwashing.


Never let on what you're doing. - It's important to not deviate from your routine. Any help you receive, or plans you make has to be something you do quickly while on a shopping errand, groceries, anywhere that you're allowed to be out of his (OR HER) sight.

Always act casual, or whatever his version of normal is. - Acting different, or smug, or like you got something up your sleeve is a dead giveaway. Don't be cocky and think that he doesn't know what you're doing. Don't act overly nice or accommodating either. Just be how you are, and not be anxious or dart your eyes around too much while quietly in deep thought. These are telling signs that you're up to something.

Make copies of all important documents. - Marriage license, birth certificates, social security cards, income verification, Health and Social Services documents, doctor papers, pictures of bruises or injuries, car titles, leases, utility bills, anything that can prove who you are, and where you've been, and have the necessary papers for where you want to go. There are places that will help you get some of things back, but if you can get away with making copies here and there, do it.

Find A Domestic Violence Shelter Near You ---
https://www.domesticshelters.org/search#?page=1


Hide a stash of clothes for you and kids, nickel and dime your way to any extra money you ever get or can get away with. Put it somewhere you know they won't find it but don't assume that they aren't always looking for stuff you may hide. Keep it at work or with a very trusted neighbor, just anywhere that he won't have access to.

Know your way out, where to go, when to call for help, when and how to leave. Practice your escape route if you can, but at a normal pace. Don't expect that it will all happen in 2 minutes, when it will really take 10 because you're being casual about it.

Write down all phone numbers you'll ever need and put them in your hiding spot. Keep track of what you have hidden there, and keep the phone numbers, addresses, websites, emails and any pertinent information about your abuser up to date. Write down his information also, such as date of birth, social security number, detail physical description and the type of abuse too. His work information, mom, dad, cousin, everyone you know that is affiliated with him.... write it down.

Leaving is the scariest and most dangerous time.


They are anticipating it. It was at these times when I experienced the most pain and destruction and realized the true meaning of "sleeping with the enemy". I would quickly change gears and pretend like nothing was wrong if I got the whiff of him knowing. Even though I was in the midst of abuse, I was alive. BUT I WAS NOT LIVING. I was merely existing. Knowing when to leave, run or literally flee for your life is all about timing. 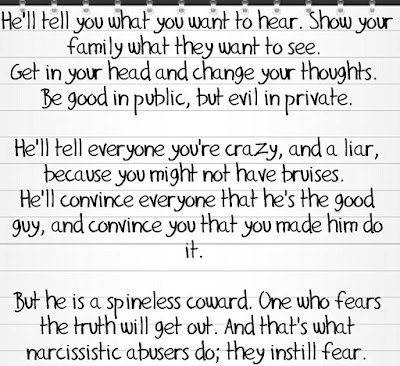 YOU CAN DO THIS!
THEY TOO LIVE IN FEAR.....FEAR THAT THEY'LL GET CAUGHT.
THAT GUILTY FEAR IS NOT YOUR PROBLEM.
THEY WILL DO IT AGAIN!

Random Link Away From This Page --- https://www.nationalgeographic.com/photography/


Plan your escape. The time to go is when they LEAST expect it. They expect it right after hurting you and all the way up until right after the beginning of the Honeymoon Phase when the "I'm Sorry" and Gift-Giving starts again. They'll second guess whether you're accepting of their apology before relaxing and getting comfortable with you being complacent once more. Don't act differently or let on that This Is It. This is the last time.


Things will be less tense during now and before it's too long... ''you'll do something, it'll be your fault, look what you made him/her do". You'll know.
The Cycle Of Abuse
http://domesticviolence.org/cycle-of-violence/


Before the cycle starts again is when their guard is down, or if you happen to have all your stuff together somewhere and you're free to run, but it's when they least expect it, do it. When they are confident they've roped you in one more time, so as long as you don't act odd or give warning or nervous and tip them off.... RUN!


I endured it from someone the size of a doorway and could physically stop me. It's knowing why to go as well, not just when. Believing that its undeserving. You DO NOT deserve this! It can change the way you think about things and cause you to question your judgment and reality.

Their mission is to get in your head and control you.
I feared (and will still at various times due to PTSD) contact, retaliation, physical harm or danger to me or my kids, cyber bullying, stalking, psychological torture such as brainwashing, man this guy was a real winner. The kind of guy that never gets in trouble for anything either.

They can be smooth talkers and make you look crazy, gaslighting you, while telling the cops that you are the real problem and they are just the loving wonderful man that they see before them who is just trying to have a nice family time. This is what they are good at....HIDING A SECRET.


Sadly, some police officers are just not trained enough to recognize these signs.


I'm going on more than 8 years DV free while struggling through the stages of Early Survival to Successful Happiness and mentoring. I didn't even know what DV was while I was in the midst of it. I left and got a Restraining Order, although he has never stayed in one place long enough to be found and served. Maybe I should have pressed charges and sent him to jail. Maybe I'm just better off away from it all. Maybe he tried to abuse someone else, and they'll be stronger than I was and send him to prison. Maybe......

If I stay hidden and not talk about it, he wins. And yet the fear is enough to stay anonymous. It's just enough to get as far as I've gotten now, and hopefully you'll be even more successful than me.


I have made many life changes but revealing my name and location isn't one of them.

Random Link Away From This Page --- http://www.tvguide.com/
I can't promise that the depression, anxiety and pain will completely go away.
But you will be a SURVIVOR of Domestic Abuse,
not a VICTIM.
at 2:08 PM
Email ThisBlogThis!Share to TwitterShare to FacebookShare to Pinterest
Labels: anxiety, depression, domestic violence, stress