The day my hair died

It may seem like a silly thing to say, or think about, your hair dying, but that's how it looked and I felt how it looked.
This isn't a story about a bad color job, although remind me about the time I bleached it at home.

I was separated by my 1st husband of 10 years by about a year or so when I had the misfortune of bumping into The Abuser. Exactly 2 weeks later I got pregnant with twins. By the next day, I didn't even like him anymore and was going to tell him to kick rocks. Crazy how I know my body so well, I had that gut feeling to wait.

When people talk about a Wolf In Sheep's Clothing, they meant this guy. He was extra tall, blonde hair, blue eyed, muscular, and looked dead on like Prince Charming. That shoulda been my clue to fucking run. But this is where I say "I wouldn't have my twins or be where I am now if it wasn't for......ya".

Abusers don't start out like that of course! You don't see a guy being a controlling douche manipulative alcoholic misogynistic arrogant lying cheating addict cunt wagon and go "My goodness, where have you been all my life?!"

They fucking woooooooo you. (Then its a brainwashed Stockholm Syndrome and everyone thinks you're the one who's the bad guy). It's called the Honeymoon Phase. You'll have hundreds of them, more than lunar cycles I'm sure, but back to my hair.

You see, I didn't have just any hair, I had thick, very thick, very long, naturally highlighted, very kinky spiral curly hair. A long non permed mane. I loved it. I only wear it long. No short do has ever been cute and it wasn't cut for the first time until I was 13.
My daughter has it. My heart. ♡ 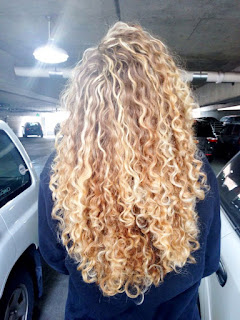 Not me, was longer but close enough.


Stress can do some crazy things to you physically. Not long after, I'm 5 months pregnant with twins and the abuse is front and center, and I'm having thoughts of driving off a cliff to rid the world of it all. Him, me, 2 boys who still don't know the half of what I went through to stay alive.

One day, I'm in the shower and after rinsing my hair I noticed quite a bit in my hand. It wasn't odd for me to lose a lot, but the handfuls wouldn't stop. I panicked. I got out of the shower and didn't brush my hair, just put it in a bun for fear of brushing it all off. I had been through stressful times, but never had clump after clump of hair just come off so easily. I immediately run to show him, because he's all I got! and I already know before I say anything....what the fuck does he care? Of course he doesn't. He laughed. He laughed at me being miserable stressed and carrying two babies and my hair was falling out.
He was a fucking lunatic.

The next day, I carefully unwrapped my bun and gently brushed it with my best brush from the bottom up. I pulled so many wads of hair out of the bristles. I broke some of them off trying to get it all.
And there it was. Something I hadn't noticed before.....straight roots...inches of it. There was barely a wave to it. I had straight, thin, brittle strands coming out of my head. I could see my scalp! How had I not seen this?!

I took my prenatal pills. I took my iron. I ate healthy, but this was my body pleading for help. It took me a while to listen though, and with each passing month, I was reminded that my hair had died, inch by inch. The spirit within me that lived in it was dying.
It looked so bad that people told me to fix my perm.

So I cut off all the curls, and threw the mane in the trash, along with whatever strength I had left in me and finally ran.

I did my best to feel good and figure out what to do with this lifeless mop, but I and it are one in spirit and pain. It's just "There" now, sometimes like me. The wild, adventurous untamable fire has flat lined.

It's good that time has passed and I make do with the new do. It's called the Janis Joplin now.
I marvel at how 1 boy got the thickness and 1 the thin, 1 the curls, 1 straight.
They're almost bigger than me now. It makes me glad were here.

It's still long, just slightly wavy and much much thinner. It's greying now. I tried every expensive hair product to bring it back, but resurrection was not possible. It is what it is.

Some things just need to be cut off and buried.

at 12:16 AM
Email ThisBlogThis!Share to TwitterShare to FacebookShare to Pinterest
Labels: depression, domestic violence, twins