No Pledge of Allegiance or National Anthem Required

I fully support being proud of who you are. I support loving your land and culture and customs. The beautiful varities of food, colors, faces, sounds and feel of life. I'm sure other people in other countries do too.
I love our purple mountains and shining seas and the right to life, liberty and the pursuit of happiness. I know other people want it too.

But freedom, oh my friends, freedom is but a shadow of the farce it feeds. And people are eating it up, all that freedom. The pot of gold that never is.

You are not free. You are bought. Your time, your blood, your obedience, and your support. The government appreciates your undying patriotism. There's nothing they like better than to know you're working hard for them, and you'll die for them.

But know this, regardless of every single right I have, whether I have to remind anyone or not what they are, I will not take up Arms with anyone, in a fight to the death, over a piece of clothe and a patch of dirt. I won't kill for your land, your oil, your gold or your minerals.

And I sure as shit am not taking an oath to die for any man, any country, any government, or any patch of dirt. 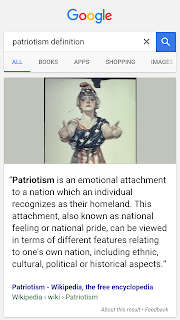 The definition of patriotism.

I fully support NOT dying for a flag (if you move to another country, do you swear to die for that flag? What if you're a dual citizen, and they both go to war? My God, who will you die for?!)

I fully support NOT PLEDGING MY LIFE TO A CORRUPT GOVERNMENT.

I fully support NOT being police stated, while men of badge, corrupt or not, who took an oath to serve and protect, not shoot to kill innocent people, without reprimand nor do I support people killing each other period.
Regardless of the reasons that they shove in our faces, the wars they've started and ended, trampling the very rights of the bodies of YOUR family members that these few elite incite, wars and profit, while feeding on your groveling!


I fully support the TEN COMMANDMENTS.
Especially those 2 about NOT killing, and NOT worshiping an idol. FYI That includes any war involving killing, and any 'thing' you pledge your life to.

I fully support anyone who stands up to injustice.

I fully support the opposition to tyrannical leadership that is clearly dictatorship, and we have a right to overturn our own government when it no longer serves the best interest of the people. IT'S IN THE CONSTITUTION, not far from the FREEDOM OF SPEECH, AND FREEDOM OF RELIGION.


I fully support ANYONE WHO IS DAMN TIRED OF THIS CORPORATE RAN, MEDIA FUELED HATRED AND GREEDY GOVERNMENT, THAT HAS YOU CONVINCED YOU SHOULD DIE FOR IT.

IF YOU are OK with being FORCED BY LAW to be one religion, to have one belief, to have no choices, to have no (real sense of) freedom, then YOU go move TO THAT COUNTRY, since you're all cool with oppressing and judging people and shit.

You must have forgotten the many men imprisoned for refusing to be drafted.

You must have forgotten how the Vietnam War soldiers were spit on when they returned.

You must have forgotten that they are a huge part of the disabled homeless veteran population that the government ALSO FORGOT ABOUT.

But I bet they said The Pledge of Allegiance and stood for The National Anthem, and everybody's awesomely patriotic with leaving home, and dying on OTHER dirt, get it?!

at 12:39 AM
Email ThisBlogThis!Share to TwitterShare to FacebookShare to Pinterest
Labels: Government